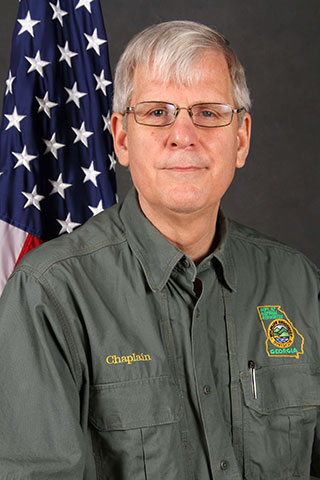 Dr. Charles L. Houston served forty years as an ordained minister in the United Methodist Church (UMC). Since his earliest days of active ministry, he has been heavily involved with public safety agencies throughout South Georgia, first as a volunteer fireman and then a law enforcement chaplain. Dr. Houston retired from the ministry in 2009 to form Caring Connection Chaplaincy in order to fully dedicate his time to serving the agencies and people to which he relates.

Dr. Houston began his involvement with public service agencies in 1976 when he served as pastor of Plains UMC and joined the City of Plains Volunteer Fire Department. As pastor of St. Mary's UMC, he continued to serve as a volunteer fireman and was appointed by the Chief as police department chaplain. During this time, he attended Coastal Georgia Police Academy where he completed the "Basic Law Enforcement Training" Course.

When Dr. Houston served as Senior Pastor of Centerville UMC (1984-1989), Richmond Hill UMC (1989-1994) and Thomasville First UMC (1994-_), he served as Chaplain of the Police Department in each community. In Thomasville, he facilitated the creation of LISA (Law Enforcement Spouses Association.)

Dr. Houston has been a certified Chaplain with POST, Georgia Peace Officer Standards and Training Council since 1995. He is also a member of ICPC, International Conference of Police Chaplains. Since 1997 he has served as Senior Chaplain with the Georgia Department of Public Safety (Georgia State Patrol/Motor Carrier Compliance Division).

In 2005, Dr. Houston became Chaplain with the Georgia Bureau of Investigation, and in 2008 he joined Georgia Department of Natural Resources (DNR), as Chaplain with their Law Enforcement Section. He is also a member of the Executive Committee of the Governor of the State of Georgia Homeland Security Chaplains and is certified to serve in disaster situations.

Dr. Houston received certificates of training in "Group Crisis Intervention" and 'Individual Crisis Intervention and Peer Support" in August 2010 through FLETC, the Federal Law Enforcement Training Center in Brunswick, Georgia. He has been Chaplain with the Darien, Georgia Police Department since 2010.